The real inside couple of DC 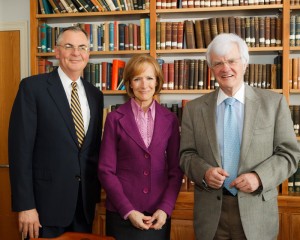 In a wide-ranging conversation, journalists Al Hunt (’65) and Judy Woodruff talked about politics and government, working and raising a family in Washington, D.C., the rise of social media and the decline of traditional journalism, and the increasingly partisan, bitter style of politics, during an appearance at Wake Forest Wednesday night.

Sitting on the Wait Chapel stage with Wake Forest President Nathan O. Hatch, Hunt and Woodruff answered questions from Hatch and students during a Voices of Our Time event billed as an evening with “The Real Inside Couple of DC.”

“It’s the most fascinating city in the world,” Hunt said of Washington. “If you’re interested in power, there’s no better place to be.”

Hunt and Woodruff, who have been married since 1980, have raised three children in Washington and covered the national political scene for four decades. Hunt spent 35 years as Washington bureau chief for The Wall Street Journal before joining Bloomberg News in 2005 as executive Washington editor. Woodruff, a former White House correspondent for ABC News and Washington correspondent for CNN and PBS, is now co-anchor of The PBS NewsHour.

Much of their conversation focused on politics. Hunt said that Barack Obama, despite his problems, still holds an advantage heading into the 2012 campaign because of the power of incumbency and the weakness of the Republican field of candidates. Hunt, who acknowledged that he has a terrible track record predicting presidential races, said he expects Mitt Romney, the former Massachusetts governor, or Tim Pawlenty, the former Minnesota governor, to be the Republican nominee in 2012.

“The economy — and the direction of the economy — always shapes the election,” Hunt said. “If the unemployment rate is 9% in October (2012), the president is in trouble. If it’s 8%, that’s a slight plus. The role of government and spending priorities will also be key issues, and the state of the wars — if Afghanistan escalates, if Iraq goes south, if Gadhafi is still there (in Libya), that’s going to create problems” for Obama.

Hunt and Woodruff also discussed their long careers. Hunt credited Wake Forest with helping him become a journalist because Wake Forest “kicked me out of college,” he said, following a rowdy party celebrating a Wake Forest basketball victory over North Carolina. During his six-month “sabbatical,” he went to work for The Philadelphia Bulletin as a copy boy and “got hooked on journalism.”

After graduating from Wake Forest, he went to work for The Wall Street Journal. Turning to Woodruff, a graduate of Duke University, Hunt quipped that the only job she could find after graduating was as a secretary for an Atlanta television station.

“The landscape has changed dramatically since I started out in television,” recalled Woodruff, who went on to cover politics and government for NBC, CNN and PBS. “When I asked the news director to cover stories, he said, ‘We already have a woman reporter.’ More than half of reporters (today) are women, but the positions at the top — the decision-making and hiring and firing roles – are still very tough for women to break through.”

The political environment in Washington is decidedly less civil than 40 years ago, both said. The proliferation of 24/7 cable news shows has fueled the negative atmosphere. And, people tend to only watch the television shows and visit the websites that support their views, rather than seeking out opposing viewpoints.

— by Kerry M. King (’85), Office of Communications and External Relations