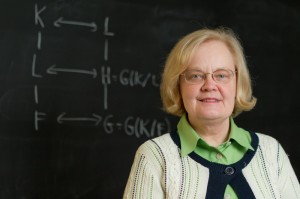 Longtime mathematics professor Ellen Kirkman has received an award for outstanding service from the Mathematical Association of America.

“Throughout her career Ellen has been willing to take on important and demanding projects for the math department, for Wake Forest, and for national organizations such as the American Mathematical Society and the Mathematical Association of America,” said Professor and Chair of Mathematics Steve Robinson. “Her list of accomplishments in all of these arenas is beyond being impressive. I find it particularly remarkable that, even with her many service accomplishments, she has consistently maintained high standards as a teacher and scholar.”

Kirkman, who is also director of the graduate program in mathematics, joined the faculty in 1975. She received the University’s Schoonmaker Award for Service in 2007.

She has served in a number of leadership roles with the national MAA and with the Southeastern Section of the MAA, and with the American Mathematical Society.