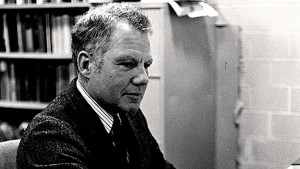 Professor Emeritus of Chemistry Paul Gross, who taught from 1959 until 1987, died March 17 in Winston-Salem. He was 91. A memorial service will be held on Sunday, April 3, at 3 p.m. in the Wake Forest Welcome Center.

Professor Emeritus of History Jim Barefield, who taught honors courses with Gross and succeeded him as coordinator of the program, said Gross had wide-ranging interests, particularly in art and literature, that made him well-suited for the honors program.

He recalled that Gross would invite prominent guest speakers to meet with the honors students, including the head of the National Gallery of Arts print department, and Germaine Bree, an internationally renowned authority on 20th century French literature who at the time was teaching at the University of Wisconsin. Bree would eventually join the Wake Forest faculty, in 1973, as Kenan Professor of Humanities.

Professor of Chemistry Willie Hinze remembered Gross as a caring and generous person. He frequently invited students to dinner at his home in Faculty Apartments and offered the use of his beach house at Pine Knoll Shores, near Morehead City, to colleagues.

Gross taught courses in general and physical chemistry. “He was an advocate for research at the graduate and undergraduate level,” Hinze said. “He understood the synergies that came from research and how it enhanced undergraduate education.”