Humanities at the heart of education 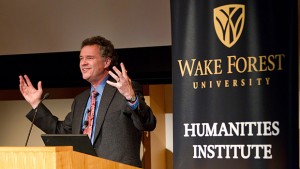 Historian and University of Richmond President Edward Ayers delivers the keynote address at the official launch of the Wake Forest Humanities Institute.

The humanities aren’t an idea whose time has passed, but a content-rich trove of knowledge that should be actively shared to help students and others understand the past and present, historian Edward Ayers said during his keynote address Friday at the official launch of Wake Forest’s Humanities Institute.

“Make sure in every venue available to us that we embody what the humanities can be,” Ayers, president of the University of Richmond, told a large crowd of Wake Forest faculty members and students. “We need to put ourselves in conversation with all the people out there who are interested in what we know.”

That is what Wake Forest’s new Humanities Institute will do, he said. For too long, institutions have built up “arbitrary divisions” that keep academic departments from working together and walls to keep out “amateurs” from benefiting from the substance that the humanities have to offer, he said. Faculty in the humanities need to work together to make connections between their disciplines and share their knowledge.

Ayers spoke at Reynolda House Museum of American Art during the opening session of a two-day symposium marking the official launch of the Humanities Institute. Author and New York Timescommentator Stanley Fish, the Davidson-Kuhn Distinguished Professor of Humanities and Law and Florida International University, also spoke.

In his speech, Ayers emphasized the “substance of the humanities” and the need to engage students and others. The humanities provide context and narrative in making connections between the past and present, he said.

As an example, Ayers, a Southern historian and a pioneer in “digital humanities,” displayed on a large screen the website for BackStory, a public radio program with an extensive web presence that makes history relevant and interesting to the public. Ayers is one of the three “American history guys” on the show.

The site is currently addressing a topic that many people still feel passionately about: was the Civil War caused by slavery or states’ rights? The website and radio show are a way for scholars to take their research and scholarship out of the classroom and engage the public in issues they are interested in, he said.

Ayers dismissed any notion that the humanities is in decline. “We change individual lives in our classroom everyday. What we do is worth defending and celebrating everyday.”

In an earlier interview, Ayers said that by starting a Humanities Institute, Wake Forest is “stepping up to ensure that the humanities remain a powerful force in the 21st century.”

Universities such as Wake Forest and Richmond must fight back against trends that show undergraduates don’t feel that they can afford to major in the humanities and are specializing earlier and earlier in their college careers. The State University of New York at Albany is one university that is ending programs in the humanities – in French, Italian, Russian, classics and theatre – because of low enrollments.

“Students are looking for an education that offers a quicker return right out the gate,” Ayers admitted, so Universities must do a better job explaining the value of the humanities. “Humanities education is wonderful preparation for whatever you do,” he said.

“The humanities live with the challenge of both keeping alive the cultural heritage of the world and reinventing it. That is at the heart of what we do.”