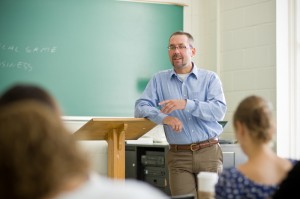 Cuban dissidents and Cuban-American leaders have started to ask why Cubans haven’t followed the lead of oppressed populations in Egypt and Tunisia in overthrowing long-entrenched regimes. Associate Professor of Political Science Peter Siavelis said he doesn’t expect to see demonstrations for democracy in the streets of Havana anytime soon.

Political and economic conditions in Cuba are more similar to North Korea than Egypt or even Libya, said Siavelis, an expert on Latin American politics. “The level of repression is much more systemic and substantial than in Egypt.”

The Communist government’s security apparatus is pervasive and quick to shut down any opposition or protests before they have a chance to grow, he said. Fidel and Raul Castro still have the support of the military and secret police. And, because the government controls the media and only the Communist Party elite has Internet access, many Cubans might not even know about the popular uprisings in the Middle East and North Africa, he said.

“Cuba is a small, insular place,” Siavelis said. “The government maintains a vice grip over any exchange of information. There is a real sense of isolation among the people, which has limited their ability to build any social capacity for change.”

There are some similarities between Cuba and Egypt, Siavelis said, including a long-standing oppressive regime, high unemployment, an increasingly younger  population, and a lack of opportunities for even the well educated.

Unlike Egypt, Cuba lacks any significant organized opposition, any private enterprise beyond a small number of self-employed people, and a free flow of information, both within the country and in news coming from other countries, he said. Few Cubans — primarily Communist Party leaders and members — even have access to a computer, and there are tight controls on the Internet, Siavelis said.

Cuba is one of the last centrally controlled economies in the world. The government employs about 85 percent of of the population. President Raul Castro has made some economic reforms, such as allowing more workers to be self-employed, since he succeeded his brother Fidel in 2008.

Castro announced last year that about 20 percent of government workers — around one million people — would be laid off beginning this month. But on Monday, he announced that the layoffs have been postponed, perhaps with an eye toward avoiding any protests like the ones that sparked the uprisings in the Middle East and North Africa, Siavelis said.

“Even though Raul has instituted some significant reforms — allowing for some private-sector ownership of businesses for instance — the economy is still in the hands of the government, which lessens any chance of political reform,” Siavelis said.

And there’s still the matter of the 50-year-old U.S. embargo, which Siavelis believes hurts the cause of democracy because it limits the flow of people, goods and information into the country. “The government still waves the flag of national sovereignty and plays up U.S. hostilities. The Castro regime has outlasted presidents going back to Eisenhower, so you have to think at some point that it’s not working.”

Siavelis sees more similarities between Egypt and Venezuela than between Egypt and Cuba: an educated, urban, mobile population; unified opposition; access to outside media sources; and oil money being diverted to support other oppressive regimes, including Cuba.

Siavelis and other Cuba watchers will be watching closely when the Cuban Communist Party Congress convenes in Havana for the first time in 14 year next month. Siavelis expects decisions to be made then about the future of the country’s leadership. Fidel Castro is expected to resign as head of the Communist Party and to be succeeded by Raul Castro. Raul Castro has said that the congress will officially adopt reforms to modernize the Soviet-style economy, but how far those reforms will go remains to be seen.

Siavelis expects Cuba to follow the model of Vietnam and China: slowly embracing limited economic reforms, while maintaining tight political control. “But economic reform does unleash a demand for political reform, and then the question becomes, is the government able to repress that,” he said. “In Vietnam and China, because of the tremendous economic success, the government has been able to do that. But I don’t see Cuba being able to replicate that economic success.”