The Prop’s The Thing for stage shows 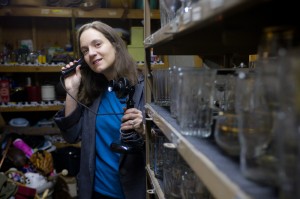 The suitcases in “The Grapes of Wrath.” The gun in the climactic scene of “West Side Story.” The small glass animals in “The Glass Menagerie.” The bottles of alcohol in “Cat on a Hot Tin Roof.”

Props are often vital to a play’s storyline, but no one ever really thinks about them — until the gun doesn’t fire at the right time.

“We tend to not pay much attention to props until they’re not working,” said Associate Professor and Chair of Theatre JK Curry, who has edited a recent book on props. “But props enhance performances in interesting ways. Props convey messages that may not be in the dialogue.”

Read more campus news at Inside WFU.
Professor of Theatre Cindy Gendrich: “Why do we laugh?” 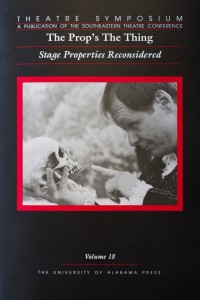 Curry has paid a lot of attention to props in the last two years. First, she helped organized a Southeastern Theatre Conference (SETC) on props that was held at Wake Forest in 2009. More recently, she edited “The Prop’s the Thing: Stage Properties Reconsidered” (SETC and the University of Alabama Press), that contains revised presentations and papers presented at the conference. (The book’s cover features a photo of actor Michael Huie (’84) with a famous prop, Yorick’s skull.)

Whether you think about them or not, props are an integral part of every theatre production and part of how a playwright visually tells a story, said Curry, who joined the faculty in 1998. There can sometimes be overlap between props, set dressings, costumes and scenery, but generally props are anything on stage that “can be manipulated by actors,” she said.

Props have received little academic study, Curry writes in the introduction to “The Prop’s the Thing.” “Humble stage properties are objects that often escape notice when they are functioning properly. Though insignificant at first glance, theatrical props are worthy of our attention, and not only because of the potential of the inappropriate or malfunctioning prop to destroy illusion and disrupt a performance. It is equally fascinating to consider how props can be skillfully employed by playwrights and other theatre artists.” 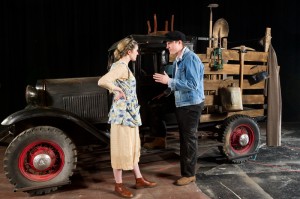 Juniors Mackenzie Finnegan and James French in "The Grapes of Wrath."

A play such as the University Theatre’s upcoming “Grapes of Wrath” (opening Feb. 18 on the MainStage Theatre) is prop-heavy — and time specific — of items needed to convey the despair of a Depression-era family on the move: musical instruments, tools, pots and pans, plates and dishes, suitcases, pillows and mattresses, and a 1928 Model T that will make its way onto the Main Theatre stage.

Props are an underappreciated element of theatrical productions, Curry said. “Props help create the world that the characters inhabit. A skilled playwright can build a story around props, and the props take on a symbolic weight. There are times when props demand attention, but you don’t necessarily want the audience to be thinking about the prop.” 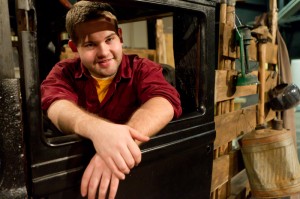 Senior Perry Ransbottom is the prop manager for "The Grapes of Wrath."

Every University Theatre production has a student prop master who works with the director and design team to compile the prop list. As student-actors learn their lines, the prop master goes on a scavenger hunt for the right props — checking the theatre department’s own prop storage room, other college and professional theatres in the area, Army surplus stores and antique stores.

Does it really make a difference if the flashlight in “The Grapes of Wrath” is bought off the shelf at Lowe’s, circa 2011, instead of a 1930s one?

Absolutely, says theatre professor Sharon Andrews, who is directing “The Grapes of Wrath.” “In a play, you are asking the audience to suspend disbelief. Having the wrong prop — and believe me, someone will know — can quickly throw an audience out of the play. If you break that contract with the audience, then you lose the story.” 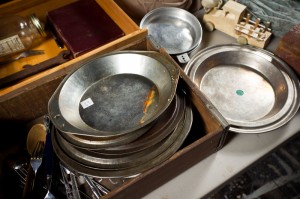 Props can be more complicated than just finding a particular object, Curry notes. Food and drink are considered props, so you have to be concerned with the actors’ safety, if they have to consume them, and replenishing them for the next show. Blood is another prop that can be sticky; how do you show it? Do you wash out the costume or have a duplicate for the next performance?

Dead bodies present another challenging prop. Curry includes a whole essay on bodies in “The Prop’s the Thing.” The essay, “Shakespeare’s Body Parts, Babies, and Corpses,” was written by one of the keynote speakers at the 2009 conference, Andrew Sofer, author of “The Stage Life of Props” and associate professor of English at Boston University.