A memorial service for Professor Emerita of English Dolly A. McPherson will be held Saturday, Feb. 19, at 11 a.m. in Wait Chapel. A reception will follow in the Benson University Center. McPherson, who was 82, died Jan. 19 in Brooklyn, N.Y.

McPherson was the first full-time African-American female faculty member at Wake Forest when she was hired in the 1970s. For 27 years, from 1974 until retiring in 2001, she was a lively presence in the English department and in her classroom. 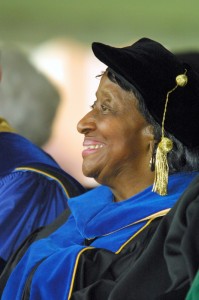 A memorial fund has been established in her memory at Wake Forest. Gifts may be sent to Wake Forest University, P.O. Box 7227, Winston-Salem, NC 27109.

“She was an amazing mentor for me and for many of my colleagues; she lovingly called us her ‘sister-friends,’” said Professor of English Mary DeShazer. “She was constantly talking to us about teaching and working across racial and cultural differences and being inclusive in our pedagogy. She was also adamant that every person deserved respect, and she would challenge disrespect, whether it was racial or class or other wise, at every turn when she saw it.”

DeShazer recalled once walking across campus with McPherson and was impressed that she greeted every student and professor they met. “She was always so gracious and welcoming.”

McPherson’s lifelong friendship with poet and author Maya Angelou led Angelou to join the faculty in 1982 as Reynolds Professor of American Studies. She later wrote a book on Angelou, “Order Out of Chaos: The Autobiographical Works of Maya Angelou,” published in 1994.

She was a unique person and a demanding teacher, said Professor of Biology Herman Eure (Ph.D. ’74), who was hired the same year, 1974, and was the first full-time African-American male faculty member. “She was a very bright woman with a great sense of humor.”

“There are a lot of students who owe a lot to Dolly McPherson, and not just black students. But she was particularly good with those black students early on who didn’t see things in themselves that she would pull out of them, with tweezers if she had to,” Eure said. “Many students would be really frightened of her at first, because she was very demanding and held them to what they were supposed to be doing. But what they found out later was that she would be a great advocate for them.”

McPherson first visited Wake Forest in 1971 when she accompanied Angelou to a speaking engagement on campus. At the time, McPherson was working at the Institute of International Education in New York as a senior program administrator for Africa and Asia.

“(She) was the ideal companion to help me brace for a Southern trip,” Angelou wrote in an essay in Ebony in 1982. “She was New Orleans’ born, educated in Boston and had spent two years in Europe as a Fulbright Scholar.”

On that visit, Angelou and McPherson struck up what became a life-long friendship with Elizabeth Phillips, then chair of the English department, and Phillips soon pushed for McPherson’s hiring to the English faculty.

“From that first exchange, Elizabeth knew what kind of person she was and how much knowledge she had of literature, and how articulate she was,” recalled Dean Emeritus Tom E. Mullen, who was then Dean of the College. “She had a strong background in African-American studies and literature. When you consider how very few African Americans there were on the faculty in those years, she was someone who made a contribution that no one else could make.”

At a dinner honoring McPherson in 1995, Phillips, who died in 2008, said McPherson had enriched the University by her “faith, forthrightness and diversified interests, her passionate devotion to American literature, scholarship, teaching, racial justice and gender equality, and above all, her students.”

McPherson recalled her early years on the faculty in a story in Window on Wake Forest in 1991. “For a black woman of a particular age to be a successful pioneer in the South on a predominantly white campus requires much. Certainly strength, and humor, and a bit of arrogance, and the ability to either confront or ignore unpleasant behavior stemming from racism.”

She taught at Lincoln University in Missouri in the 1950s before spending a year as a Fulbright lecturer in American literature and language at the University of Amsterdam. She taught briefly for the University of Maryland as a lecturer in English in Frankfurt, Germany, and at Virginia State College in Petersburg, Va. She worked at the Institute of International Education from 1962 until 1973 and taught at the City University of New York for one year before joining the Wake Forest faculty.