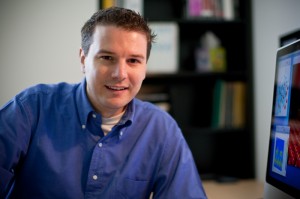 Assistant Professor of Physics Timo Thonhauser is one of only eight scholars nationwide to be named a KITP Scholar for 2011 – 2013.

The Kavli Institute for Theoretical Physics (KITP) at the University of California at Santa Barbara selects seven or eight college or university faculty members each year to serve as visiting researchers at the institute.

“The interaction with other people in your field opens you up to new ideas and inspires you,” said Thonhauser, who joined the Wake Forest faculty in 2008.

KITP is the preeminent international center for advancing theory in science and is directed by Nobel laureate David Gross. Theorists in physics and allied fields collaborate there on a broad range of topics at the leading edges of science. Scholars are chosen based on their research accomplishments and future research potential.

KITP Scholars continue to teach at their home institutions, but periodically visit the institute to work with other scientists there during their three-year appointment. Thonhauser is on a research leave at Oxford University this semester, but will return to Wake Forest to teach in the fall.

Thonhauser is a theoretical physicist who studies the properties of materials using quantum mechanics. He is currently investigating drug/DNA interactions, hydrogen-storage materials for renewable energy, and water. “As important as water is, we really don’t understand it,” he said.

A native of Austria, he graduated from the University of Graz in Austria and had postdoctoral appointments at Penn State and Rutgers. He was a research associate at MIT before joining the Wake Forest faculty.