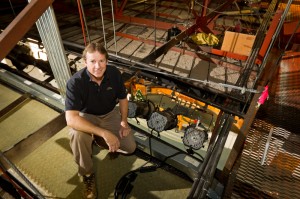 Jay Lawson, better known as “Mr. Mobility,” has had a birds-eye view of two Presidential Debates and appearances by numerous politicians and celebrities — Hillary Clinton, James Earl Jones, Jay Leno, Alec Baldwin, Marcel Marceau, Doc Severinsen and Adam Sandler, among others — during the last 25 years as the technical manager for Brendle Recital Hall and Wait Chapel.

Why do people call you Mr. Mobility?

The name came from early in my career here, and still applies, by the fact that I am seldom in one place for very long (especially my office). With shows going on in both halls, I tend to be “on the move” often.

What do you do?

I am responsible for all shows and rehersals in the chapel and the recital hall, as well as maintaining both spaces. I have a crew consisting of students and part-time employees and am responsible for their training, payroll, etc. Other events come up at different locations on campus (and off) that will require my “expertise” as well.

Luckily, there haven’t been that many, but more than I wish there were. The worst potential snafu might have been losing the TV feed from the chapel to Brendle for the 2000 Presidential Debate. Brendle was the room in which Pres. Hearn and many other VIP’s were to view the debate, allowing more seats in the chapel for students. After many successful tests during the day, we found we had no audio for the feed about 20 minutes before the event was to start, and no way to contact anyone in the chapel at that time, due to security lockdown. Luckily, one of my very heads-up students suggested we simply change channels from the chapel feed on channel 2 to any of the local networks covering the debate (since the debate staff had just installed cable TV access into Brendle). She may have saved my job! She certainly got full credit when I reported to Pres. Hearn.

What do you most enjoy about your job?

It has to be working with my crew and the other students here. I have been very lucky to have had so many wonderful, intelligent, driven personalities to work with over the years, and have many friends in so many places now because of our time together. The variety of shows we do is also a big plus.

What’s been your favorite event over the many years you’ve worked here?

Too many to isolate one. Obviously there have been many big events on campus, but my favorites tend to be the ones that have allowed me to work with some celebrities in both the entertainment and political arenas that are true professionals and very nice people.

How did you end up at Wake Forest?

I was working at Walt Disney World in Orlando, and my wife decided to get her Master’s Degree. We literally picked a state in which we would like to live, Wake accepted her, and the job I currently have opened up at that time, for which I was qualified. Though I only expected to be here a couple of years, we have both made this area our home and have been fortunate to work in our fields for so long.

What do you do when you’re not working?

My main activity is my weekly football game. Every Sunday that we can, from August to May, you can find me on a football field. When I’m not being a dad, I’ve found time to perform in different areas (drumming, acting, clowning).