Fulbright specialist Sam Gladding to discuss ‘a slice of Turkey’ 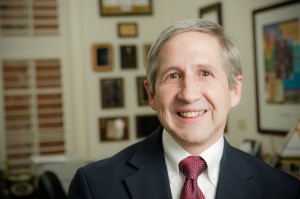 Chair and Professor of Counseling Samuel T. Gladding shared his expertise of family counseling with educators and students in Turkey during a month-long stay there last summer as the University’s first Fulbright Specialist scholar.

Gladding (’67, MA ’71) will share his experience with colleagues at this month’s Thursdays at Starling program on Nov. 4. The program, open to faculty and staff, will be held in Starling Hall beginning at 4 p.m.

Professor of Theatre Cindy Gendrich and Assistant Professor of Anthropology Sandya Hewamanne are also on the program. Gendrich will discuss her research project, “Why Do People Laugh?”, which received an NEH Enduring Questions grant. Hewamanne, recipient of the third annual Hatch Award for Academic Excellence, will discuss her summer research at Oxford’s Bodleian Library on the writings of a Buddhist revivalist and its impact on Sri Lankan women.

Gladding will discuss “A Slice of Turkey as Viewed by a Fulbright Specialist.” While he was in Turkey, he spoke to university students and professors; gave about a dozen workshops and presentations on topics ranging from “The Creative Arts in Counseling” to “Humor and Mental Health”; and led a two-day workshop on marriage and family therapy for the Turkish Psychological Counseling and Guidance Association.

“It was an opportunity to share my knowledge, to further the counseling profession in a different country, and to learn more about a culture with which I was not familiar,” said Gladding, who made his first trip to Turkey.

“Although a number of universities in Turkey offer counseling programs, it is still a relatively new field,” he said, “similar to where the counseling field in the U.S. was 20 years ago. There is no tradition of family counseling there but there is movement towards one, so we looked at how mainstream family theories translate into what counselors do in practice.”

While Gladding is the first Wake Forest faculty member to be named a Fulbright Specialist, other faculty members have received other Fulbright awards. In 2008, business professor Jon Duchac was named a Fulbright Distinguished Chair and taught for a semester at the famed Vienna School of Economics. The same year, Sylvain Boko, Zachary T. Smith Associate Professor of Economics, and David Weinstein, professor of political science, won fellowships from the Fulbright Scholar Program to teach and conduct research for a year in Uganda and Germany, respectively.

Gladding joined the Wake Forest faculty in 1990 as an assistant to then-President Thomas K. Hearn Jr., and later served as the University’s associate provost. He was named chair of the new counseling department in 1996. He has taught undergraduate classes on the creative arts and counseling and graduate courses on family counseling. A former president of the American Counseling Association, he was once cited as among the top 1% of contributors to the Journal of Counseling and Development, the flagship journal of the American Counseling Association.