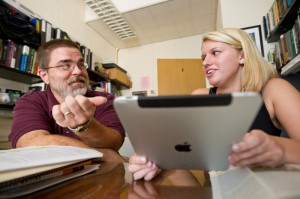 It was like Christmas morning when a dozen shiny, new iPads were delivered to Darcy Delph’s office this summer.

Apple’s latest bit of technology was eagerly anticipated by faculty members at who are assessing whether such electronic gadgets have a legitimate place in the classroom. “It’s a cool piece of technology and a lot of (educators) are interested in seeing how they can use it,” Delph said.

Delph (’09) is the newly named coordinator of academic-information technology and a member of the Strategic Planning for Innovation and Technology and Information Committee (SPITI), which asked faculty members to assess products such as flip cameras, software and various other electronic tools for academic uses.

SPITI was commissioned by Provost Jill Tiefenthaler in the fall of 2008. Grants were awarded to 11 faculty groups who participated in the Summer Technology Exploration project.

“The goal of the summer was to get the faculty who are interested in new technologies engaged in thinking critically about whether or not it would be useful in the classroom. Wake Forest doesn’t want to use technology just for the sake of using technology,” Delph said.

Reports about some of the projects are posted online. More detailed reports from participating faculty members will be submitted in the fall.

The summer project was a worthy effort, said Jed Macosko, associate professor of physics and an iPad user, times two. He was so eager to get his hands on one this summer that he used his own funds to make sure his arrived early.

He said that the iPad, and competing products that will soon enter the marketplace, are powerful tools.

They allow users to easily network and collaborate. He is working with students to create wikis about specific subjects, information that will be used in a  seminar for first-year students this fall.

He said the iPad has impressed him, and he sees how such small, portable computers may hasten the move away from printed textbooks, which are costly to produce, expensive to buy, and out of date as soon as they are published.

Portable, networkable technology allows students and teachers to easily update information, review it and share it.

Students also like to use iPads, said Dan Johnson, senior lecturer and Kirby Faculty Fellow in the Department of Biology.

“Students who tested a prototype digital textbook chapter still wanted the tactile experience of sitting on their sofa, flipping pages, and highlighting passages. Large touch-pads are the first devices that can reproduce that tactile experience,” he said.

As with any technology, though, there are bugs to work through. For example, the iPad is better at providing content than it is for editing and sharing, Johnson said.

“Working on web content, I find it difficult to edit live wiki pages that are more than a few paragraphs long, so I do not expect we will be using the iPad as the input tool for student authors this fall.”

Still, each wave of new technology has its faults. If the faults are outweighed by the overall benefit from using a new gadget, then it will be adopted, Macosko said.

The iPad was the most-sought tool this summer, but Macosko said competing products are being developed and will likely improve on technology.

“We’re just using the iPad because it’s the only tool available right now,” he said. “It represents a pretty big stepping point.”