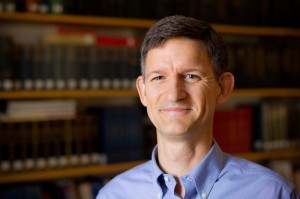 As with most empires of the Early Modern Era (1500-1800), the Ottomans mobilized human and material resources for warmaking on a vast and unprecedented scale. A new book by Assistant Professor of History Charles L. Wilkins examines how the constant warfare challenged and reshaped one city’s social and political order. His book, “Forging Urban Solidarities: Ottoman Aleppo 1640-1700,” is part of a series on the Ottoman Empire by Brill Publishing.

“I would say that this book offers a valuable historical perspective on our (Western) conception of Muslim society,” said Wilkins, who joined the faculty in 2006. “We tend to view Muslim societies as monolithic, inherently militarized and inclined to violence, but looking more closely we discover complex societies with a plurality of interests, both peaceful and militant. As my book tries to show, civil institutions at the local level were among the most vigorous in debating the costs of war and, if necessary, resisting state demands for warmaking.”

Wilkins examines the effects on the Syrian city of Aleppo as the Ottoman Empire engaged in wars with Venice (1644-69), Poland (1672-76) and the Hapsburg Empire (1663-64, 1683-99). Aleppo was an important Ottoman trading center and home to a predominantly Muslim population, whose preoccupation with commerce, much of it international, made them wary of military expansionism, even against non-Muslim states, he said.

“The book shows how Muslim civil society contested the state’s efforts to raise taxes to finance military campaigns and how the massive mobilization and de-mobilization of soldiers created tension and unease among status groups and social classes.

“It is worth noting that the Islamic doctrine of jihad, which is popularly translated nowadays as ‘holy war,’ did not exercise much force as a mobilizing ideology among many segments of 17th century Ottoman society,” he said. “The concept had long been appropriated by Ottoman state authorities as a propaganda tool, and their repetitive use of it over time to further secular imperial interests had weakened its appeal.”

Wilkins researches the history of the Ottoman Empire in the 16th, 17th and 18th centuries and teaches classes on world civilizations, the Middle East and Muslim empires.