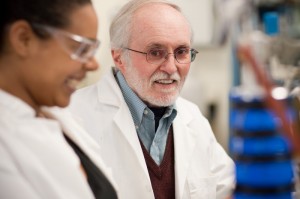 Decades of working with undergraduates in his chemistry research has earned chemistry professor Ron Noftle national recognition. Noftle was one of 12 educators recently named a 2010 Senior Scientist Mentor by The Camille and Henry Dreyfus Foundation.

“Many (senior) faculty no longer teach courses nor take on graduate students. Their wealth of experience and knowledge, however, makes them a unique and valuable educational resource for undergraduates,” said Mark Cardillo, executive director of the Dreyfus foundation. “This program provides for the development of a relationship between these senior scientists and the students as they engage in perhaps their first research experience to generate new knowledge.”

The award includes $20,000 in funding that Noftle will use to continue his research into new materials for use in batteries and solar-cell power generation. He is collaborating with researchers at Wake Forest’s Center for Nanotechnology and Molecular Materials and with faculty working to establish a Center for Energy and the Environment. The Dreyfus Foundation, based in New York, was established in 1946 by chemist and businessman Camille Dreyfus to promote the chemical sciences.

Noftle, who has taught at Wake Forest since 1967, is now going through phased retirement. He has included undergraduates in much of his research throughout his career. Though they may not have the experience and expertise of graduate students, they learn quickly and can do cutting edge research if they stick with it, he said.

Melissa Donaldson, a chemistry major who graduated last May and is attending MIT to earn a Ph.D in chemistry, worked with Noftle in his lab for three years. “He’s like MacGyver,” she said of Noftle. “Give him a toothpick and a rubber band and he’s good to go. He’s a creative mentor.”

Noftle draws from his own experience as a student to guide his younger charges. He earned a bachelors degree in chemistry from the University of New Hampshire in 1961. He enjoyed the program because he was allowed to participate in research projects. By the time he moved on to graduate school, he had already written a thesis and was well prepared for graduate-level research. As a teacher, Noftle said he lets his students ask their own research questions as they mature in their research skills. Doing advanced research makes them better students in the classroom as well.

“Undergraduate research gives students going on to graduate school a real edge,” he said. “They gain experience in planning their experiments, taking their own measurements, using our most sophisticated instruments, and becoming familiar with the chemical literature in their field of study. It’s an invaluable experience.”

Christa Colyer, chair of the chemistry department, said that Noftle is the “quintessential teacher-scholar.”

“The fact that he continues to involve undergraduates in his research program even through his current phased retirement period indicates how intertwined the teaching and research missions of this institution are,” she said. “Many students don’t truly fall in love with the study of chemistry until they have the opportunity and responsibility for participating in a mentored research project.”