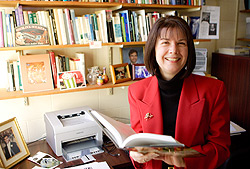 Professor of English Claudia Kairoff and a research colleague have received a second major grant from the National Endowment for the Humanities to edit the works of the early 18th century British poet Anne Finch.

Kairoff and Jennifer Keith, an associate professor of English at UNC-Greensboro, received $165,000 from the NEH toward their ongoing research to produce a comprehensive scholarly edition of the writings of Finch, considered by many scholars to be England’s best female poet prior to the 19th century.

They had previously received $50,000 from the NEH for a shared fellowship to study a Finch manuscript at the Folger Shakespeare Library in Washington, D.C., next spring.

Kairoff and Keith are co-editing The Works of Anne Finch, Countess of Winchilsea (Cambridge University Press), a two-volume critical edition scheduled for publication in 2013. That year marks the 300th anniversary of the only volume of her works that Finch published during her lifetime, Miscellany Poems, on Several Occasions.

Finch (1661-1720) and her husband were members of the court of James II, but fell from power when James was disposed. In a large and diverse collection of poems, plays and letters, she wrote about her personal world and the social mores and political upheaval in England at the time.

She was largely forgotten until a century later when William Wordsworth praised her nature poetry in an essay in his 1815 volume Lyrical Ballads. The first — and last — major collection of her works was published in 1903.

“Aside from incomplete editions, her work has never received the full critical attention necessary to establish the definitive texts, with thorough introductions, annotations and appendices, of her poems and plays,” Kairoff said. “Standard critical editions are the first places to which scholars turn when researching and writing about important literary figures, so our Finch edition will provide a resource that 18th-century scholars, poetry scholars, feminists and many others have long wished for.”

The new NEH grant is specifically for scholarly editions and translations. “We are really thrilled to have secured this grant, as it will provide funds for exactly the kinds of research and consultations we need to ensure an authoritative edition her works,” Kairoff said.

For instance, the grant will allow Kairoff and Keith to consult with specialists in fields such as Restoration drama and Restoration British lyrics as they seek to better understand Finch’s writings. They also will be able to consult a specialist in collation, an important aspect of scholarly editing that compares different versions of texts. The grant also will enable them to develop a website that will allow them to do things impossible in print, Kairoff said, such as showing different versions of Finch poems side-by-side and showing maps and other illustrations.

Kairoff, who joined the faculty in 1986, teaches Restoration and 18th century poetry, theatre and non-fiction prose. “I especially love teaching women’s poetry because it is still a wide-open field for original research, theorizing and interpretation,” she said. “I like to tell students there is plenty of scope for their scholarly aspirations, since many early modern writers are still being discovered and studied. Anne Finch has always been known, if not given her critical due, but there are plenty of obscure but worthy poets waiting to be recovered.”

Kairoff’s own study of a neglected, late 18th-century poet, Anna Seward and the End of the Eighteenth Century, is forthcoming. It will be the first monograph devoted to a critical analysis of Seward’s poetry, essays and letters, and follows a critical biography of Seward by Teresa Barnard, published in 2010, that was the first in 80 years.

– By Kerry M. King (’85)
Office of Communications and External Relations