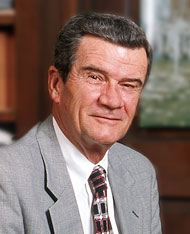 William G. Starling has been named dean of admissions and financial aid at Wake Forest University.

In June, Starling will celebrate 43 years of service to Wake Forest. He is among the longest serving directors of admissions in the country.

“Bill Starling’s long and loyal service in such a critical institutional function is a central element in the modern history of Wake Forest,” said Wake Forest President Thomas K. Hearn Jr. “To the central academic question ‘Who should study here?’ Bill Starling has provided the answer for four decades.”

The Smithfield, N.C., native graduated from Smithfield High School in 1953.