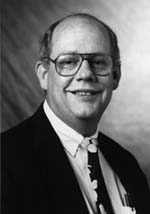 Allan Louden, an associate professor of communication at Wake Forest University, was presented the National Debate Tournament’s George Ziegelmueller Award for his work with collegiate debate.

The award is presented to a faculty member who has earned distinction in the communication profession while coaching debate teams to competitive success at the National Debate Tournament.

Louden, Wake Forest’s director of debate since 1977, was recognized for his past work as the chair of the National Debate Tournament Committee, president of the American Forensics Association, chair of the Committee on International Discussion and Debate, and his editorial work with the journal, Argumentation and Debate.

The award is named in honor of George Ziegelmueller, a professor and debate coach at Wayne State University who has been involved in collegiate debate for more than 30 years.

Louden’s award was presented during a banquet as part of the 54th National Debate Tournament hosted by the University of Missouri in Kansas City.