May 2013 comings and goings

See a list of employees joining and leaving the University in May 2013: END_OF_DOCUMENT_TOKEN_TO_BE_REPLACED Read more

Ceremonies will be held for Veterans Day 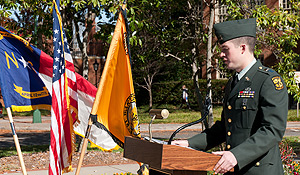 Two ceremonies will be held on campus for Veterans Day on Monday, Nov. 12.

The ROTC will hold a ceremony at Perritt Plaza in front of the Benson Center at 11 a.m. This year’s guest speaker is Tom Eller, the district commander of the American Legion and a U.S. Navy veteran. In addition, World War II veteran Fred Hahn will be in attendance. Wake Forest’s associate chaplain for Jewish life, Michael Gisser, will deliver the invocation and benediction. Gisser is also a chaplain in the U.S. Army Reserves.

All veterans who attend will be recognized for their military service. A wreath will be laid at the base of the flagpole in honor of veterans who have died in the pursuit of freedom. In case of inclement weather, the ceremony will be held in Benson University Center, Room 409.

In addition, the ceremony will feature: the national anthem performance by freshman Lauren Darnis, color guard detail, presentation of Wake Forest Military Challenge Coins and a Taps ceremony in memory of the fallen, highlighted by a special dedication to friends who passed away this year, including Mike Farrell, trustee and Board of Visitors president (U.S. Army National Guard); John Medlin, trustee and Executive Partners mentor (Navy); and Matthew Peck, 2012 MBA graduate (Navy).

Wake Forest Jewish students, faculty and staff will join Jews around the world to celebrate the Jewish Festival of Lights, more commonly known as Hanukkah, from Dec. 1 – 8.

Each night, students and others will gather at the stage on Manchester Plaza to light a six-foot menorah. The menorah, recently purchased through the University Chaplain’s Office, is the largest in Winston-Salem. The services will be led by Wake Forest’s Jewish student group, Hillel. END_OF_DOCUMENT_TOKEN_TO_BE_REPLACED Read more

Rabbi Michael I. Gisser has been named associate chaplain for Jewish life, a new part-time position in the Chaplain’s Office. He is the first Jewish staff chaplain at Wake Forest. He is also assistant dean and department chair of the Jewish Studies Department at American Hebrew Academy, a college prep boarding school in Greensboro. He has also served as the Jewish chaplain at Fairleigh Dickinson University and executive director of the Holocaust Museum and Study Center in Spring Valley, New York.