Political event to be held on campus March 13

This message was emailed by Communications and External Relations to students, faculty and staff on the evening of March 12:

President Clinton is expected to attend a Get Out the Vote event at 3:45 p.m. on Sunday in the Wake Forest University School of Law Professional Center Library. The event is open to the public; however, space is limited and access is not guaranteed. Doors will open at 3:00 p.m.

The event is organized by the Hillary Clinton campaign.

Traffic on and around the Reynolda Campus is expected to be heavy Sunday afternoon. Due to the number of visitors anticipated, the University encourages students, faculty and staff not planning to attend the event to avoid the area around Worrell Professional Center throughout the afternoon.

Law library specialist leaves her mark on the walls of Worrell 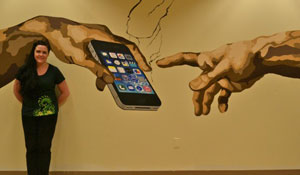 Law library specialist Holly Swenson is a designer and artist who, in addition to her other responsibilities, also helps produce the law school’s alumni magazine, The Jurist.

When construction began in the basement of the Worrell Professional Center, Swenson saw the opportunity to use one of the walls as a canvas to practice painting a mural. The result is a modern take on a portion of Michaelangelo’s “Creation of Adam.”

Read more about the mural in a Q&A with Swenson written by School of Law Communications student intern, Rachel Wallen (’17)

Visit the law school library’s service desk for help in finding the mural, which will be available for viewing through the fall semester.

See a list of employment milestones reached by staff in July 2012 (corrected):

See a list of employment milestones reached by staff in June 2012: