Listen for the Carillon music 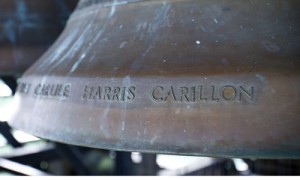 Each semester, undergraduate students apply for the opportunity to learn to play the carillon with the intention of becoming a student carillonneur. Typically, each student carillonneur plays one or two recitals per week. This year, a record-breaking 11 students practiced weekly, but did not have the chance to perform. These students will be playing today and tomorrow.

As is the custom at Wake Forest, after the last classes of the semester on Wednesday, the Carillon will be silent as students concentrate on studying for exams.

For Commencement weekend, Ryan Whittington will be playing the Carillon at the Baccalaureate service. Ryan has composed a fantasia on the letters WAKE, using only the four notes which correspond musically with those letters. On graduation day, Bradley Hicks along with Raymond Ebert, Wake Forest’s Carillonneur, will be playing “Carillon” by the famous French organist Louis Vierne.

Ebert graduated from Wake Forest in 1960 and from Union Theological Seminary in 1962. He was organist at Centenary United Methodist Church from 1970 until 2011.

Connecticut governor Dannel Malloy is declaring Dec. 21 a Day of Mourning in his state, and he is asking Connecticut citizens to observe a moment of silence at 9:30 a.m. In addition, is asking houses of worship and government buildings that have the capability to ring bells 26 times during that moment in honor of each life that was taken at Sandy Hook Elementary School.

Malloy sent letters to governors through the National Governors Association, asking other states to join Connecticut on Friday morning in a moment to reflect and mourn.

The carillon in Wait Chapel will ring its bells 26 times at 9:30 a.m. on Friday in a show of support, said chaplain Tim Auman.